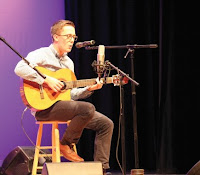 The evening featured a variety of styles, from Broadway favorites and old standards to the modern music of Adele. Though many of the numbers were solo acts, The Side Notes, a mixed voice a cappella group, sang in delightful harmony with a wistful Sting song and an energetic Beach Boys medley. Also interspersed among the solos were a duet by sisters Jessica and Jenny Wood, and a father/daughter duet by Matthew and Brenna Ryder.

The finale was a moving rendition of I’ll Stand By You, a song that seemed particularly relevant to the event. Production Manager Janelle LoSciuto, the 2002 scholarship recipient, said the award has played a part in many of the participant’s lives. “It is former students coming together to support current students. I think that’s special,” she said.

The Richard Nickerson Scholarship fund was started in 1997 by parents of the Windham Chamber Singers in appreciation of Dr. Richard Nickerson, director of Windham High School choirs and the Windham Chamber Singers. Each year, $1,000 is awarded to a graduating senior who plans to pursue music in some way during his or her college experience. LoSciuto said that although recipients don’t always choose music as their major, “They always carry their passion for music with them.”

LoScuito says alumni are happy to return for the scholarship concert. “A lot of people who received [the scholarship] feel connected to the program and the school, and are willing to give back this way,” she said.

The net is cast wide when seeking participants and any alumni who wish to participate are welcome. LoScuito said she begins with a mailing list of former WHS music students and those who have participated in the concert previously, and then takes it to a more personal level through social media, phone calls and emails. If the group was too large, they might ask performers to do duets or ensemble pieces, but usually they end up with just the right number of participants, said LoSciuto. 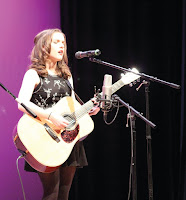 2017 will mark the 20th anniversary of the scholarship program though due to a snow cancellation in 2010 it will only be the 19th concert. LoSciuto said that next year’s concert, which will be held, as usual, on the first Saturday in January will be a larger and more exciting event which will include an alumni chorus directed by Dr. Nickerson.